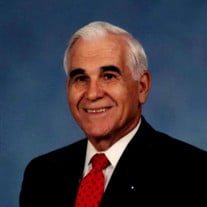 Carl Jean Adams (96) of Hot Springs Village transitioned to heaven to spend eternity with Jesus on February 23, 2018. He was born in Conway, AR November 20, 1921 to Carl and Imo Adams. Carl grew up in Perryville, AR where he starred on the 7 man high school football team, played basketball and literally "ran" all over town delivering the Arkansas Gazette before school each morning, He attended Arkansas State Teachers College (UCA) for 2 years before his education was interrupted-by WWII. He volunteered and served in the Air Transport Command where he was a flight instructor and eventually flew "the Hump" delivering supplies from India to China. After the war he enrolled at UA Fayetteville and obtained his BS degree in agriculture. Carl's career primarily was with Travelers Insurance Company as a manager in Mississippi and Alabama, Upon retirement in 1980 he moved to Hot Springs Village where he became very involved in Village United Methodist Church serving in multiple areas of responsibility including President of Methodist Men, chairman of the Boy Scout Committee Troop 7, and chairman of Pastor Relations Committee, Head Usher and Chairman of Ushers spanning 25 years. His time as a Gideon in the HSV camp was a real joy for him. He was very proud of his home state of Arkansas. He was also a huge Razorback fan which included serving one year as President of the HSV Razorback Club. Carl loved golf and his greatest golf thrills were the 2 holes in one on Village courses. Carl was predeceased by his parents, his loving wife of 45 years Mabel Henry Adams and sister Farrell Henry. He survived by his son Jerry Adams (Penny) of Little Rock; grandchildren Angela Singleton (Bruce) of Little Rock; Brad Adams (Kathleen) of Dallas, Texas; and Christa Gorney (Brian) of Lakewood, Colorado; 9 great-grandchildren; sister, Melda Rice of Jacksonville, AR and many nieces and nephews. He is also survived by his special "lady friend" of 18 years Barbara Gordon. Our profound gratitude and God's blessings to the awesome staff at Mount Carmel Assisted Living Facility in Hot Springs Village and a special note of gratitude to Erin and Ashley for their extraordinary care and compassion The funeral services will be at Village United Methodist Church on Friday, February 23. Visitation will be at 1:00 and funeral service to follow at 2:00. Graveside service will be at CedarVale Cemetery in the Village. In lieu of flowers, memorial gifts to Village United Methodist Church or Gideon's International Hot Springs Village Camp would be welcome.

Carl Jean Adams (96) of Hot Springs Village transitioned to heaven to spend eternity with Jesus on February 23, 2018. He was born in Conway, AR November 20, 1921 to Carl and Imo Adams. Carl grew up in Perryville, AR where he starred on the 7... View Obituary & Service Information

The family of Carl Jean Adams created this Life Tributes page to make it easy to share your memories.