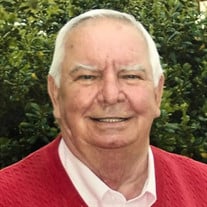 Calvin “Smitty” Hill Smith It is with great sadness that the family of Calvin Hill Smith announces his unexpected passing on Monday, September 24, 2018 in Hot Springs, Arkansas. He was born on April 20, 1930 to the late Joseph A. and Lucy Burton (Maile) Smith. Mr. Smith was proud of his service in the United States Army during the Korean Conflict, earning the rank of Corporal. Mr. Smith began his sales career at The Oak in Petersburg in the 1950s. He moved to Charleston, SC in the 1960s, where he managed John Tryon, Ltd., an upscale clothing store in North Charleston, for over 50 years. He not only took pride in his business, but truly relished the friends he made during his time clothing the people of Charleston. After retirement, in 2015, Mr. Smith relocated to Hot Springs to be closer to his Arkansas family. While in Charleston he was an active member of Bethel United Methodist Church. When he moved to Hot Springs he attended First United Methodist Church. He loved the Lord and was absolutely devoted to his Christian faith. He took great pride in witnessing his faith, and often distributed inspirational material to friends, family and even strangers. As a young man, he was choir director at Kenwood United Methodist Church in Dinwiddie and directed many musical productions in the community. He would often break out into song in his rich tenor voice, singing anything from hymns, to opera to show tunes. He was also renowned for his cooking and baking skills. He loved to share these dishes with others, which he did daily, right up until his passing. In addition to his parents, he was preceded in death by his sister Doris Lloyd; and his brothers, Joseph A. Smith, Jr., John A. Smith, Milton Smith and sister-in-law, Mary Ann. He is survived by his sister-in-law, Mary Smith of Albany, GA. Mr. Smith took extreme pride in his family. He never married but made daily phone calls to his nieces and nephews. He was quick to say he had the best family in the world. He will be lovingly remembered by his niece and nephew, Donna and Alex Smith, who took an active part in his care when he moved to Arkansas. Other family members left to cherish his memory are nieces and nephews: Barri Tulgetske, Jim Whisenhunt (Jan), Diane Orsburn (Anthony), John Wayne Smith, Janet Douglas, Kenney (Joanie) Smith, Brian Smith, Morris Smith, Jill Thomas, Sue Ellen (Al) Marek, Milton Smith, Jr. (Jenny), Bobby Smith, Angie Lamb (Jerry), and JoAnn Barfield, as well as, numerous great-nieces and nephews. A graveside service will be held at a later date.

Calvin &#8220;Smitty&#8221; Hill Smith It is with great sadness that the family of Calvin Hill Smith announces his unexpected passing on Monday, September 24, 2018 in Hot Springs, Arkansas. He was born on April 20, 1930 to the late Joseph... View Obituary & Service Information

The family of Calvin "Smitty" Smith created this Life Tributes page to make it easy to share your memories.

It is with great sadness that the...