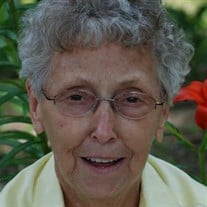 Billie Hickman, 84 of Hot Springs, AR died surrounded by her family on Sunday morning, April 10th in Charleston, SC. She was born to the late John Redmond and Gussie Anderson King on February 12, 1932 in Conway, SC. The family later moved to Charleston, SC where Billie graduated from Chicora High School in 1950. After high school she was employed by Southern Bell. In 1957 Billie moved to California where she met the love of her life, Roy Hickman. They married February 1, 1958 in Las Vegas, NV. They later moved to Arkansas, until Roy's death in 2014. In 2014, Billie moved back to Charleston, SC where spent the remainder of her days being close to her family. Billie enjoyed cooking, sewing, knitting, and any other kind of craft. There wasn't any dish she couldn't cook or any dress she couldn't sew. She never met a stranger and you never left her house hungry. More than anything, Billie loved young people and I am sure she is heaven now playing with all the unborn children she lost. Her greatest pride was being a mother and grandmother. She enjoyed attending church, and was a member of Grand Avenue Baptist Church. In prior days she enjoyed working the nursery and teaching knitting classes. She was predeceased by her parents; husband of 55 years; sisters, Mary Tracy and Betty Maxwell and numerous brother and sister in laws. She is survived by her daughter, Susie Hendricks (John); granddaughter Hope Coltharp (Glenn) and grandsons John and Jason Hendricks all of Charleston, SC; sisters, Nancy Toole of Seattle, Washington and Rachel McClain(Mac) of Hendersonville , TN; sisters-in-law, Eva Anderson of Texarkana ,TX and Dorothy Jewell (A.V) of Lubbock TX; numerous nieces and nephews. The family would like to thank The Palmetto's Assisted Living, NHC, and Caris Hospice for their exceptional care. Special thanks to Karen, Chery, and Jennifer who helped take care of Billie these last few years. Funeral services are 11 AM April 23rd at Hot Springs Funeral Home Chapel. A graveside service will be held at 2 PM the same day at Alpine Cemetery, Alpine AR. Flowers will be accepted or memorials made to the Alzheimer's Association, P.O. Box 96011, Washington, DC 20090. "The heart remembers what the mind forgets"

Billie Hickman, 84 of Hot Springs, AR died surrounded by her family on Sunday morning, April 10th in Charleston, SC. She was born to the late John Redmond and Gussie Anderson King on February 12, 1932 in Conway, SC. The family later moved to... View Obituary & Service Information

The family of Billie Fay Hickman created this Life Tributes page to make it easy to share your memories.

Billie Hickman, 84 of Hot Springs, AR died surrounded by her...