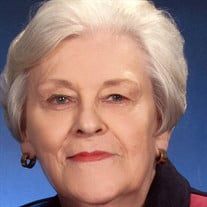 Bettye Louise Terry Eastburn, born July 14, 1933 to William Preston Terry and Etta Broadhead Terry in Hot Springs, Arkansas went to be with her Lord and Savior on April 21, 2019. She graduated from Lakeside High School in 1951 and then attended Henderson State University. A year later, she married her childhood sweetheart, James R. Eastburn in September 1952. Upon his completion of Dental School, they came back to Hot Springs to start their new life with two little boys. She was an active member of First United Methodist Church, where she served in every capacity and a faithful member of the Friendship Sunday School Class. She became a pillar of the community with her involvement in the arts, endless volunteering with the Art Center, active in the Community Players, Circle leader in the United Methodist Women, Past President of Hot Springs Junior Auxiliary, working with the Grow & Show Garden Club and a mentor to many. She was a devoted and dedicated daughter, mother and wife of 60 years. Her passion for creating every form of artwork was endless. She was predeceased by her parents; one son, Richard A. Eastburn and her husband, Dr. James R. Eastburn. She is survived by one son, Ron Eastburn; five grandchildren, Jennifer (Chris) Goodman, Christopher (Tiffany) Eastburn, Brooke Eastburn, Preston Eastburn and Alexandra Eastburn; five great grandchildren, Haley, Christopher R. and Cooper Eastburn & Grace and Lauren Goodman; and several cousins. She will be greatly missed by all who loved her dearly. Pallbearers are Kenny Beaver, Ron Eastburn, Christopher A. Eastburn, Christopher R. Eastburn, Christopher Goodman and Preston Eastburn. A special thanks to all the Home Health and Hospice employees and Nilea, Bobbi, Karen, Jazz & Madison, her caregivers. Services will be 2:00 Saturday May 4th at First United Methodist Church. A gathering will follow in the Family Life Center.

Bettye Louise Terry Eastburn, born July 14, 1933 to William Preston Terry and Etta Broadhead Terry in Hot Springs, Arkansas went to be with her Lord and Savior on April 21, 2019. She graduated from Lakeside High School in 1951 and then attended... View Obituary & Service Information

The family of Bettye L. Eastburn created this Life Tributes page to make it easy to share your memories.