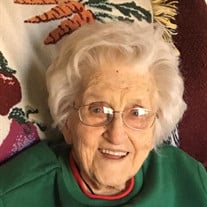 Betty Jeanne Wheatley Webb, 96, of Hot Springs ended her earthly journey on December 8, 2019 after a short illness. She was born to Roy D. and Bonnie Wheatley on April 20, 1923 in Hot Springs, Arkansas. After graduating from Hot Springs High School, she went to work for the telephone company and volunteered with the USO during World War II. A young private saw her one day at the USO and told his buddies he was going to marry that girl with the long blonde hair. They met, and young Bill Webb was soon shipped off to the European War Theater. Betty wrote him every day and picked four leaf clovers from the yard and put in each letter. They were obviously lucky as he returned home for them to marry on her birthday, April 20, 1947. Betty lived her life for her family and loved her Lord and Savior, the Christ Jesus. She was predeceased by her husband of 64 years, Clarence William (Bill) Webb, sons, Thomas William and William Thomas (Tom) Webb. She is survived by her daughter, Trudy Lynne Webb Walters and her husband, Bob of Little Rock, her son, Roy Timothy (Tim) Webb and his wife, LaVinia of Hot Springs, her grandchildren, Amy Beth and Jason Burton, Aaron Robert and Janna Walters, Stacey LaVinia and Thomas Pierce, Lauren Jeanne and Blake Eddins, Cody Timothy and Heather Webb and eleven great-grandchildren. Visitation will be Tuesday from 6:00 P.M. until 8:00 P.M. at Hot Springs Funeral Home. A celebration of her life will be held on Wednesday, December 11, at 2;00 P.M. at Memorial Gardens Cemetery with Reverend Lacy Sellars officiating. Pallbearers will be Aaron Walters, Jason Burton, Cody Webb, Thomas Pierce, Blake Eddins, Davis Burton and Braden Walters. Memorials may be made to First Presbyterian Church or Our Promise Cancer Resources.

Betty Jeanne Wheatley Webb, 96, of Hot Springs ended her earthly journey on December 8, 2019 after a short illness. She was born to Roy D. and Bonnie Wheatley on April 20, 1923 in Hot Springs, Arkansas. After graduating from Hot Springs High... View Obituary & Service Information

The family of Betty Jeanne Webb created this Life Tributes page to make it easy to share your memories.