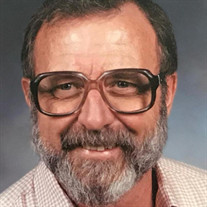 LCDR Beauford E. Myers, USN (ret) October 31, 1931 - June 14, 2022 Beauford Myers was born on Halloween, 1931 in Marion County, Indiana to Frank and Mary Charlotte Myers. After his mother passed in 1936, his father struggled to maintain the family and Beauford spent several years at Saint Vincent Villa Catholic Orphanage in Fort Wayne, Indiana. He would later enlist in the Navy on November 1948, at the young age of 17. In June 1950, Beauford met his future wife while visiting his sister in Imperial Beach, CA. On July 5, 1953 he married Vera Louise Cliburn in National City, CA. In 1955 they were transferred to Guantanamo Naval Station in Cuba, later being transferred to Norfolk, VA in 1956. In 1960 they were transferred back to San Diego, where their first child, Damon Lewis Myers, was born February 15, 1968. Their second child, John (Jack) David Myers was born September 8, 1971. On August 1, 1974 Beauford retired from the Navy as Lieutenant Commander. The family relocated to Hot Springs, AR in 1976 where Beauford would complete his college degree and begin his teaching career. He taught art at Lakeside High School from 1980 to his retirement in 1993, building up a respectable art program that continues to this day. During his retirement he collaborated with Navy colleagues regarding top-secret missions between 1968 and 1972, which the CIA declassified in 2011 allowing them to publish their findings. Beauford and his colleagues were invited to speak in Seattle, San Diego, and Washington DC, with a final 2013 presentation at the Smithsonian Institute, “Recovering a Secret Spy Satellite Capsule from 16,400 feet below the Pacific Ocean.” Beauford is preceded in death by his beloved wife of 65 years, Vera Louise Myers, his parents, his sisters Judy Floyd, Mary Cliburn and Martha Thiele, and his nephew Patrick Cliburn. Survivors include his sons Damon and Jack, his niece Ann Cliburn and his nephews Mark and Billy Cliburn. There will be a visitation Thursday, June 16th from 6-8pm at Hot Springs Funeral Home, with graveside services 10am at Morningstar Cemetery, at the intersection of Spring Street and Old Church Road. Arrangements are by Hot Springs Funeral Home Online condolences at www.hotspringsfh.com

The family of Beauford Myers created this Life Tributes page to make it easy to share your memories.