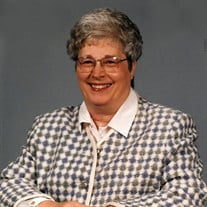 Barbara Ann Stillings, 86, of Hot Springs, AR and Franklin, TN passed in to Heaven on Christmas Eve, 2020 in Franklin after a long illness. Barbara was pre-deceased by her parents, Reverend Kenneth and Dortha Davey. Surviving Barbara are Martin, her husband of 67 years, Sons Paul Stillings of Little Rock, AR, and Tim (Melissa) Stillings of Franklin, TN and Daughter Marsha (Kerry) Hird of Anderson, IN. Also surviving her are grandchildren Greg (Lauren) Stillings of Rockford, MI, Kelsi (Bryan) Slann of Battle Creek, MI, Marcus (Andrea) Hird of Nashville, TN, Haley (Winston) Voigt of Franklin, TN, and Nathan (Kristen) Hird of Battle Creek, MI. Great-grandchildren are Wiley, McKenna, and River Hird and Claire Stillings. Barbara is also survived by sisters Ginger Williams of Maryville, TN and Bette (Rick) Strombeck of Clermont, FL, brothers Darrell (Nancy) Davey of Clermont, FL, and Jon-Mark (Jo) Davey of Deerfield Beach, FL, as well as many nieces and nephews who loved “Aunt Barb”. In 1977, Barbara opened their home to exchange student Ana Contreras Postiglione, creating a very special mother-daughter relationship and family bond that continues today. Barbara helped lead worship services by serving as organist/pianist for her church, Oaklawn Church of God, for over 50 years. Another one of her passions was her involvement in MADD, serving as president of the Garland County (AR) chapter and as an officer in the Arkansas Chapter of MADD. In the late 1980’s, Barbara worked as Deputy Court Clerk in the Hot Springs Municipal Court and later managed victim impact panels to give victims of drunk driving crashes a voice in the justice system. She was presented the MADD 2012 National President’s Award for Criminal Justice and Court Monitoring Volunteerism to honor her work. Barbara’s diverse skills and generosity touched many people in Hot Springs over the years. Educated in Ohio as a nurse in the 1950’s, she moved to Hot Springs in the early 1960’s and became ‘the weather girl’ on Hot Springs’ KFOY-TV. Her focus returned to medicine in the late 60’s and she worked with numerous local doctors to establish their medical practices. She organized the Garland County Chapter of the American Association of Medical Assistants, serving as officers in both the county and state chapters. Real Estate Services became her passion in the 80’s, managing the Garland County Association of Realtors office, producing the weekly MLS publication. Prior to retiring, she became a small business owner, operating Gal Friday Secretarial and Answering Service for many years. Barbara was a beautiful human being, confident, determined and patriotic, and she lived her life with passion, humbly served God and man, and made many friends along the way. Her Christian Faith was strong and she earned her Heavenly reward Christmas Eve, surrounded by her family. Visitation will be held Wednesday, December 30, 2020, 5:00 PM to 7:00 PM, at Williamson Memorial Funeral Home in Franklin, followed by a family service. Funeral service will be held 2:00 PM, Saturday, January 2, 2021 at Oaklawn Church of God in Hot Springs, AR, followed by a brief graveside service at Memorial Gardens Cemetery. Visitation will be at the Church, one hour before the service. Family members will serve as pallbearers. Due to Covid-19 a face covering is required and social distancing will be practiced. The family would like to thank the caregivers at The Fountains of Franklin, The Atrium at Serenity Pointe, and Garrett Woods.

Barbara Ann Stillings, 86, of Hot Springs, AR and Franklin, TN passed in to Heaven on Christmas Eve, 2020 in Franklin after a long illness. Barbara was pre-deceased by her parents, Reverend Kenneth and Dortha Davey. Surviving Barbara are Martin,... View Obituary & Service Information

The family of Barbara Ann Stillings created this Life Tributes page to make it easy to share your memories.