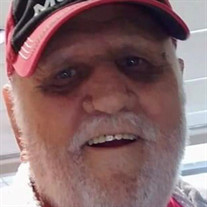 Alvin Ray Galgani of Hot Springs, passed away January 31, 2022 at the age of 76. He was preceded in death by his mother and stepfather, Louise and Alvin Marrell; his brother’s, Jimmy and Sam Marrell, Jay Breaux and sister, Judy Breaux. He is survived by his wife of 46 years, Pam Galgani; daughters, Liana Gaze (Casey), Staci Claunch (Shane), Samantha Entrekin; eight grandchildren; five great grandchildren; five sisters, Sissy Bennet, Janet Marrell, Linda Breaux, Nita Nickells and Betsy Weathers; one brother, Larry Breaux. Alvin served in the Navy and was a proud Republican. He worked for over 30 years as a car salesman. He loved making a car deal, playing pool, going to the horse races at Oaklawn Park, and watching football and NASCAR with his grandson. He was also very close to his son-in-law, Shane Claunch and they spent a lot of time together traveling to NASCAR events and working on cars in the workshop. He enjoyed being outdoors, walking downtown and visiting his friends and relatives. His grandchildren were his world. He was also a lover of animals. He never met a stranger and was such a funny, caring man who loved to share stories. He was a devoted Christian who loved God very much, was devoted to his family and taught his daughters the same. He leaved behind many relatives and life-long friends and one of his greatest joys, his Beagle, Charlie that he loved like one of his own children. The family would like to thank the Hot Springs VA and Kindred Hospice for their help and comfort during this time. Alvin’s final wish was that he be cremated and that no large service be held for him. In fulfillment of his wishes, there will be a small visitation and time of remembrance for family and friends at the Hot Springs Funeral Home on, Wednesday, February 9th from 12:00 to 1:00 PM. Due to weather conditions visitation has been moved to 12:00 - 1:00 Wednesday, February 9th.

Alvin Ray Galgani of Hot Springs, passed away January 31, 2022 at the age of 76. He was preceded in death by his mother and stepfather, Louise and Alvin Marrell; his brother&#8217;s, Jimmy and Sam Marrell, Jay Breaux and sister, Judy Breaux. He... View Obituary & Service Information

The family of Alvin Ray Galgani created this Life Tributes page to make it easy to share your memories.