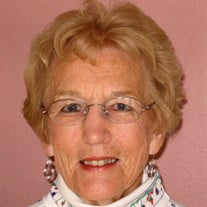 Alice Ruth Byrnes Coombs went to be with the Lord on June 6, 2020. She was born on March 22, 1928 to Louise Rogers Byrnes and Peter John Brynes. She was predeceased by her loving husband of 73 years, Richard H. Coombs, who passed on March 30 of this year. They are survived by three sons and their wives. David (Linda) of Arkansas, Richard (Jody) of North Carolina, and Timothy (Kathy) of New York. She adored all of her grandchildren. Tracey (Steven) Marek, Christopher (Cheri), Brandon (Jessica), Garrett (Natalie), Keith (Jess), and Kyle. Also, by great grandchildren Seth, Alice, Annie, Rachel, Drew, Harper, Penelope, and another on the way. Alice is also survived by her best friend and sister Virginia "Ginger." They are predeceased by brothers Robert, James, Richard "Micky", Raymond, Cornelius "Sonny", Terence "Terry" and sisters Arlene and Carol. Alice was born on the west side of Manhattan where she had a challenging childhood. Being the oldest of 10 she was responsible with helping to care for her younger siblings. Always a strong student Alice graduated from Haaren High School at the age of 16. That allowed her the opportunity to attend Sterling College in Kansas for one semester. Unfortunately, finances would prevent her from continuing her education there. Later, in her early 50's, Alice returned to school and graduated with honors, from Nassau Community College with an Associates Degree. When Rich returned from WWII, they married in 1946, and lived in their first apartment in the Bronx. They had fond memories of playing checkers and splitting a bottle of soda on "tar beach" (roof top). They would move to Ozone Park and eventually to East Meadow, NY where they purchased their first home where they raised their three sons. In retirement they spent 25 fun filled years in Palm Coast and Port Orange, Florida before moving to Hot Springs Village, Arkansas. Alice would work most of her adult life. In her early years she ushered on Broadway where she developed her love of theater. Later she worked as a secretary at Republic Aviation and from there she became a medical secretary at Winthrop University (Nassau) Hospital where she worked for over twenty years in the special hematology department. Despite the adversities Alice faced in her early childhood, she did not allow them to define her as a person. She was determined to provide a great home life for her family. To that end, Alice and Rich worked hard and made many sacrifices over the years for their sons. Alice was loved by everyone who met her. She was a humble servant who put everyone else's needs before her own. She was a dedicated Christian throughout her life even serving as a Deacon for many years. Her three greatest past-times were attending Broadway musicals, playing Scrabble and summer weekends spent at the beach. And, it goes without saying, her baked beans, crumb cakes and Christmas cookies were always a big hit. Alice was a great hostess and everyone was welcomed in their home. When Alice and Rich came to the Good Sam's Center she was known as "speedy" for her fast gait. Later, when she went into long-term care she became known as "smiley" from her caregivers for her upbeat spirit. Anyone choosing to honor Alice's memory may make a donation in her name to the Good Samaritan Society, Hot Springs Village, AR, or to Trinity Presbyterian Church, Scotia, NY.

Alice Ruth Byrnes Coombs went to be with the Lord on June 6, 2020. She was born on March 22, 1928 to Louise Rogers Byrnes and Peter John Brynes. She was predeceased by her loving husband of 73 years, Richard H. Coombs, who passed on March 30... View Obituary & Service Information

The family of Alice Byrnes Coombs created this Life Tributes page to make it easy to share your memories.

Alice Ruth Byrnes Coombs went to be with the Lord on June 6,...